A Testimonial Release is a one-way document that lets an individual or a company the rights to a testimonial someone has written for them. 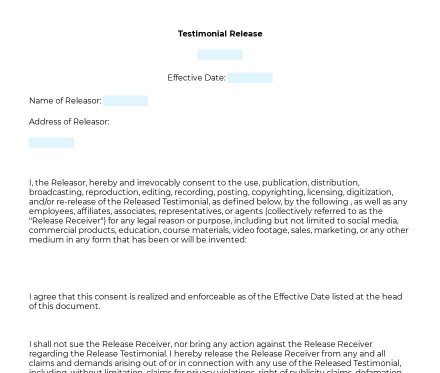 A Testimonial Release is a one-way document that lets an individual or a company the rights to a testimonial someone has written for them. This document is one-sided as only the person who wrote the testimonial (the party releasing rights), the releasor, signs the agreement. The release receiver, the party receiving the released testimonial, does not endorse it.

Testimonials, in this case, can be initially be written or spoken. If they are spoken, the testimonial will need to be reduced to writing to make this release effective. Otherwise, if the person or company is looking to use a video or photo footage of testimony, a separate Media Release will be required. A Media Release covers photos, videos, or other visual media, and this release is for testimonial use only.

When someone has spoken or written a testimonial for an individual or company, and that testimonial needs to be fully released to the party besides the one who spoke or wrote it, this document can be used. This document ensures that the person receiving the released testimonial can use it for their activity and won't owe to the releasor any money.

The document includes contact details of the releasor and a detailed description of the actual testimonial.

A completed document should be printed and signed by both parties. We recommend keeping copies in case any future disputes arise.