A Media Release Agreement is a one-way agreement that grants to an individual or company the rights to someone's personal intellectual property. 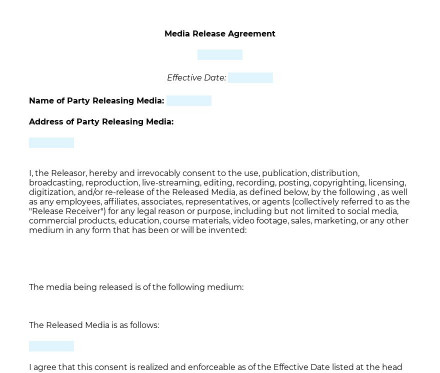 A Media Release Agreement is a one-way agreement that grants to an individual or company the rights to someone's personal intellectual property. This agreement is considered to be one-sided because only the person is releasing the rights to their intellectual property, the "releasor," signs the agreement, and makes any promises. The person receiving the released property, the release receiver, does not endorse it.

For purposes of this Agreement, personal intellectual property is referred to as "released media" and may include artwork, videos, photographs, etc. This document is, therefore, different from the Model Release, as in there it is limited to personal media only. In the meantime, the Media Release Agreement allows you to release any type of media.

This document may be used when the entire intellectual property is transferred to a party besides the one that currently owns it. The document confirms that the person receiving the released media will not owe the issuer any money or royalties.

The document contains the name of the releasor and other contact information. You also need to enter details of the released media.

A completed document should be printed and signed by both parties. We recommend keeping copies in case any future disputes arise.