A document through which a retreat organizer defines the retreat terms for the guests of retreats is called A Retreat Agreement. 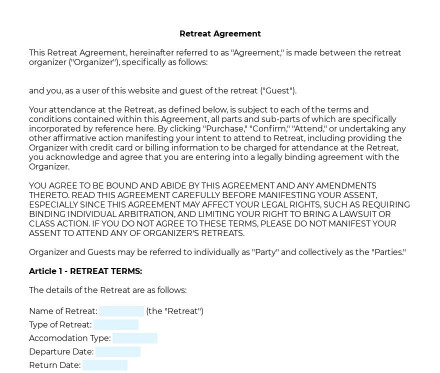 A document through which a retreat organizer defines the retreat terms for the guests of retreats is called A Retreat Agreement. The organizer can be both an individual person or an organized business. In other words, this agreement binds the guest of the retreat and is one-sided: no negotiation is available in this case. Most often, the agreement is published online, where the guest can read it and become aware of the specifics of the contract.

It is a well-known practice for the guests to sign these agreements in exchange for the guest to be able to participate in the retreat.

This document is similar to a Retreat Waiver, though it is much more extended. A Retreat Waiver only releases the retreat organizer from liability. Meantime, a Retreat Agreement not only does that but also includes many more rich details about the actual retreat.

Note that in the following states, waivers included as a part of agreements have been held invalid and, therefore, will likely not be sufficient: Connecticut, Louisiana, Montana, and Virginia.

Note that in the following states, the effectiveness of this document may be in question: Arizona and Hawaii.

Any organizer can use this document for any type of the retreat. In the document, the organizer has to describe what the retreat is about: the location, name, type, departure, and return dates, etc. Standard release clauses are also specified in the document. This may be the legal clauses in case of any injury or other.

A completed document should be posted online for the guests to read.

As previously mentioned, individual states may not permit waiver agreements to determine their effectiveness on a case-by-case basis.